skip to main | skip to sidebar

Don't just lie there, buy something

Although you may think that almost every available space has already been colonised by advertising, for example the sky - skywriting, the walls above urinals, the sides of vehicles and the cityscape in general, the internet, media of every sort, films and tv shows (product placement), aid (for eg Anglicare and Worldvision and Caritas, who use philanthropy to advertise for their idea of "G-d") just to name a few, here are suggestions to better exploit currently wasted space.

a) Game reserves - each animal could be branded (literally and metaphorically) with the name of a corporate sponsor...eg this Zebra sponsoted by Investec, this rhino protectd by Falcoln Security, this tree proudly adopted by Anglo-Gold (could be gouged into the tree for maximum effect)

See also organic-advertising-or-foie-gras/
Posted by Mano at 2:08 PM No comments:

In the ever present war between my and my children which revolves around me getting them to eat bits of left-over food and them disdainfully refusing, I have one mighty powerful secret weapon. The Smoothie.

Into the blender goes slightly aged banana, cut up peaches (I excise the bits the fruit flies have got to, of course), molasses (for iron), some soya or cow's milk, and a bit of honey, brown sugar or date honey to sweeten. If its a hot day some ice cubes as well. If they're a bit protein starved a big dollop of yoghurt. If we have some a splash of parav (non-dairy) or, occasionally, regular icecream.

These concotions are generally received with acclaim and downed with relish. Of course if I push the envelope and put in odds and sodds like wheat germ, barley grass, alkaline powder (because they don't eat enough veg and the body tends to become very acidic - an environment in which viruses thrive), left over trail mix the younger one, he of the curley locks and fussey palate - will refuse it with a polite "I don't really like it abba." The older one will eventually half surface from whatever book he is reading, extend a hand and fish around for the glass, possibly connect with it, hold the glass aloft in the air for another four or five pages, and then drink deep, so that a layer of pink or orangie liquid coats his upper lip and the fine fine hairs of his nascent mustache. "Excellent Abba, thanks very much" he'll say, "it tastes like coca cola."

If I'm in a sneaky unbalanced mood I may throw both caution and decency to the wind, and even experiment with dropping in things like old pizza, celery stalks, chinese broccoli,slightly off ricoota cheese, etc, but then guilt and cunning will make me compensate for, and disguise the taste of, aforementioned noxious ingredients by throwing in a chocolate biscuit, or masses of brown sugar, or a few dessertspoon fuls of milo. Sometimes it works, sometimes it doesn't. But I'm managing to empty out the fridge without having to give everything to our spinifex mice, worm farm or, worse still, the rubbish bin.
Posted by Mano at 9:07 PM No comments: 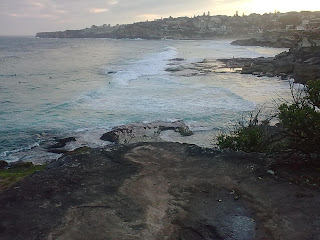 One of the amazing thing about Australia in particular, and perhaps about many affluent countries in general, is the amount of nurturing amazing stuff that's out there, freely accessible, in the public domain. One of the nices events on the Sydney calendar - if you can call it an event because its so meditative and lesuirely - is sculpture by the sea. Even though the photographs on the website are technically better than ours, this is what caught our eye. Some because of their whimsy, some because of their (sometimes disturbing) evocativeness. 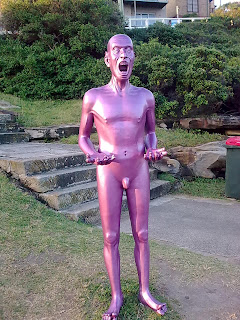 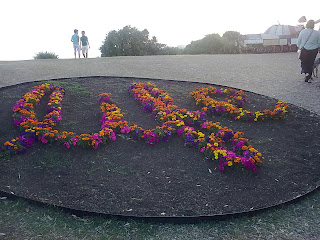 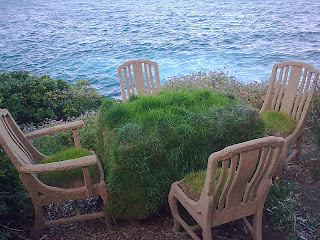 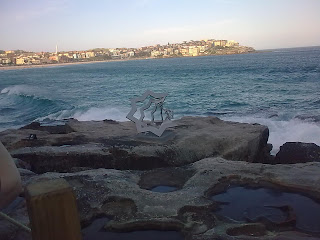 How fortunate we are to live so close to such a beautiful coastline and to such a playful re-visioning of it.
Posted by Mano at 10:05 PM 2 comments:

Get (rid of) Mano

I have been advised that in order to get a mainstream job in Australia I must strip my CV of any indications that I might be creative, imaginative, spontaneous, iconoclastic or have the capacity to truly think outside the box. For many (perhaps most) Australian employers all these things spell “great danger” because what is required is a plodder who will do things in the same way as they have always been done.

In addition skills must be very concrete – if you’ve authored a collection of poetry, that’s a demerit and a liability and indicates you’re probably a bit flaky, but if you’ve written a policy paper on implementing no leash zones for minature poodles under 7 kilos born after 2008 in the greater Randwick municipality then you’re potentially a very useful person!

Generalists and dabblers and dreamers are a danger, evidenced based experts who keep their vision narrow (but not necessarily deep) are an assett.

Perhaps this is all another dimension of what, in common parlance here, is referred to as the "tall-poppies syndrome" If you excel (in an area other than sport) you need to be cut down to regulation size. Of course, this tends to not be the case once you have truly made it - then, as anywhere, you are celebrated, and your succes becomes the collective heritage of all Australians.

Buy a Toyota (or Honda, or Subaru) and kill a whale

Well many whales actually. Maybe its time those of us who love the idea of whales - and I say idea becauuse how many of us have actually seen a real whale - and anyway its hard to love something that big. respect. yes. Awe. Yes. Wonder. yes. But love? Perhaps but at a suitably safe distance. So those of us who like the idea that when we drift off to sleep at night, the last few remaining whales are not being harpooned and turned into whale soup or whatever the Japanese do with them, maybe its time we started voting with our hard earned shekels and buying European or Korean cars. I don't say Chinese, because of Tibet and a whole host of other reasons, and I don't say Iceland because, although they also whale indiscriminately, they don't make cars, or much else, and any kind of boycott may not be effective.
But Japan may respond to a downturn in sales, and anyway Korea and several European countries make some pretty good cars. Just a thought.
Posted by Mano at 8:37 PM No comments:

(With apologies to Raymond Chandler)

I must preface these posts by saying that what motivates them is a feeling of anxiety in my belly and chest.

One of the reasons the Israeli-Palestinian struggle-embrace (even if the interdependence is not acknowledged) is so intractable is that it is such fertile ground for projection. People from all over the world, when they grow heated about it, are often not really arguing about the substantive issues, or even care deeply for the welfare of the protagonists, but rather are arguing about their own displaced psychic matter, projected onto one or other of the sides and identified with.

The Israelis are me, or the Palestinians are me, their suffering is mine, the injury to them is an injury to me, and so I must do something about it for “I” am on the line

Of course most debates in the public domain work this way, be it pro life vs pro choice, global warning vs climate change deniers, etc. But there is something about “the Jews” which seems to act as a psychic magnet, drawing huge amounts of psychic energy towards them both for, and usually more massively, against.

"Everyone's got to serve someone"

Mano
a "hogeh deyot" - Hebrew for someone who thinks a lot about things that are not directly related to the daily round. I worships two G?ds, that are probably one and the same - creativity and balance. Sat. Chit. Ananda. Gila Rina Ditza ve Chedva. Adoshem Hu Elokim. Veshal-om shanti shanti.