skip to main | skip to sidebar

Desire and other bits and pieces

My sister's an econut. So I go straight from the old aged home to Susan. We have sex. Afterwards I feel horrible. Empty. Where've you been, asks my wife, when I get home. I make up some story about needing some air so I stopped to walk around Centennial Park. At home there are piles of dishes. The boys need to tidy up their room. Its an impenetrable mess. And so is the rest of the unit.

Well Mr and Mrs Levy, there's a lot that can be done these days,

No no we're not concerned about his letter recognition
Dyslexia? Don't worry, we've made considerable advances since the 1970s. There's great new techniques....some of our business leaders were dyslexic and I have a colleague who

You don't understand doctor, that's not the problem.
Oh, then what's...

Its his reading. He doesn't play sport. He doesn't have friends. He doesn't help in the house. He doesn't get out of his pyjamas in the morning. He doesn't do his teeth. He doesn't talk to us – unless you call the occasional grunt talking. He doesn't get out of the car. he doesn't walk up the stairs. What he does is sit on the couch, or on a chair, and read. And read. And read. He reads before he goes to sleep. And he reads before he goes to school. He tries to read at meal times. And while doing his homework his eyes steal across to the nearest newspaper headline or cereal box or anything else that has letters. We've tried hiding his books. It doesn't help. We've tried not taking him to the library. It doesn't help. He just rereads whatever is in the house. He reads the introductory pages in the phone book. he stands looking over our shoulder reading emails.

For other short stories see

Desire (written around 1990)
She was sitting, studying, and he kept on walking round and round the shelves nearby so that he could stare at her. After a while she noticed him, and when he pretended he was gazing at the contents of a shelf, he was aware that she was looking at him, not without interest. She was thin, but with a very full bust. Her face was only moderately attractive, but her body reawakened all the reservoirs of his lust, and he kept on looking, the reaction her form evoked from him hijacking his entire being and eclipsing all other matters. From then on, as always happened when a cycle of infatuation began, he noticed her everywhere. They would pass in the corridor, he saw her chatting in the cafetaria, or bumped into her in the law building. It was not that he stopped noticing other girls, but there was a silent communion established with her, an inarticulate tension which made him need to clamp down on something inside him when he felt her presence.
Posted by Mano at 5:51 PM No comments:

You're lying in bed on a Sunday morning, and your husband is giving you an unconvincing massage because he hopes afterward you'll consent to sex. You'd like to loose some of the knots in your neck from the week's mad rush, but your precocious ten year old is sitting next to your right ear reeling of an endless list of facts and figures about cars in an unstoppable stream of cylinder sizes and horse power and torque and kilowatts and recommended prices and he's just moving onto a detailed comparison between the Honda 'Odiousy' and the 'Folkswagon' beetle and needs to know which one you'd choose if you could afford either and you'd prefer not to answer but both he and you are drowned out by your eight year old who rattles a box of marbles so as to drown out his older brother's recitation and there you lie in the din as your husband hits a bone that's excruciatingly sore...

You're lying in bed on a Sunday morning, and your husband is giving you an unconvincing massage because he hopes afterward you'll consent to sex. You'd like to loose some of the knots in your neck from the week's mad rush, but your precocious ten year old is sitting next to your right ear reeling of an endless list of facts and figures about cars in an unstoppable stream of cylinder sizes and horse power and torque and kilowatts and recommended prices and he's just moving onto a detailed comparison between the Honda 'Odiousy' and the 'Folkswagon' beetle and needs to know which one you'd choose if you could afford either and you'd prefer not to answer but both he and you are drowned out by your eight year old who rattles a box of marbles so as to drown out his older brother's recitation and there you lie in the din when a great wave of laughter arises in you like a bubble rushing its way to the surface and you surrender to the giggles and your husband catches it and then the boys and you're all shaking and shuddering in recognition that this is as G-d as it gets...

There is the social Judaism of Jewry in the West, of acculturated but not at ease Jewry in places like the US, UK, Australia, Canada and the like.

There is the national religious Judaism of Mizrachi and Benei Aliva and Gush Emunim (the faith block, nationalist-religious Israelis) where the concept of am (nation) and eretz yisrayl (land) is used as a focussing device

There is the Judaism of liberalism and universalism, where Judaism is used to give sanction to the liberal, politicaly correct rights and individual choice centric mores of the 20th and 21st century. Egalitariansim, fluid tgender roles, same sex marriages, non discrimination, etc etc

There is the Judaism of the meshiach and intellectual process, here G-d serves as the justification for a very structured and boundaried approach to managing reality, the reason behind daily routines, which appeals to a particular type of personality. (where would they be located in the Enneagram??) The tradition of Lithuanian Jewry, with its great cerebral yeshivot which all serve a non-rational agenda are the prime example of this...

There is, very rarely, a G-d centred Judaism, where the divine obliterates all human distinctions, and it can no longer be called Judaism or anything else.

I imagine these categories exist in other faith communities as well.

A word about focussing devices: they cannot be too close, or too far.

So at the end of the Pesach/Passover seder / meal we say "LeShana haba beyerushalayim / next year in Jerusalem, and while we certainly want Jerusalem to be there, and continue being there (as a city? as a symbol? as a symbol of the Omnipresent? Then why locate Him/her in a particular city...let everywhere be Jerusalem) we also certainly don't want to be there, in Jerusalem, else we'd go and live there - nothing stops us except that there's no real reason to - or no connection - or not enough connection - so we might as well be saying next year in Alice Springs or Phuthaditchaba, because we certainly have no intention of living in those places either.

So we like the tzadik, the holy man, the guru as long as he doesn't tell us to stop making him a tzadik and do the work ourselves.

I'm afraid of living in Israel
because there's so much reactivity there
so much unconscious stuff
the pain body, as Eckhart Tolle calls it, is so big and solidified
and I'm worried that, because I am not firmly established in clarity,
if I'm there I won't be able to help
I'll just become another part of the problem,
instead of the solution
____________________________
Posted by Mano at 7:33 PM No comments:


(and fortunately so, if you happen to support Australia or England). However,


the lesser-known South African Animal Football Cup can be relived over and over,


(aged 10). The sharks take on the sardines and the meerkats tackle the zebras in an


entertaining, illustrated yarn that offers a bit of environmental education in the

"Kids ...are going to love The African Animal Football Cup ...The story is about the animal kingdom’s version of the soccer World Cup but there’s more to it than that. There are lessons in friendship, teamwork, community and life in the wild.  This is the kind of book that a child can keep for years and enjoy different aspects of while growing up. ...[it] will even leave the adults chuckling as they recognise some of their own character traits in the animals."  Babalwa Shota, City Press, June 13 2010 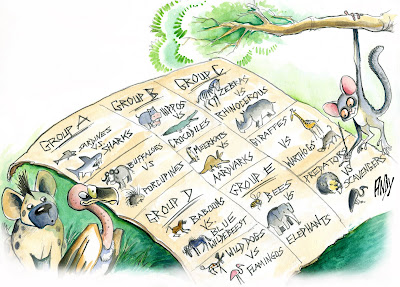 And the laughter of the Lord will go forth from Yerushalayim

This video is of a laughter meditation group in Jerusalem, the capital of Israel. It features Nisim, a 95 year old who was born in Turkey during the first world war, and is still laughing with life in 2010.
Posted by Mano at 8:43 PM No comments:

The good of the Jewish people is for us to have another child, perhaps to "make up" for (as if that were possible) the six million slaughtered in the Shoah - the Holocaust. Perhaps to allow a soul that did not complete its mission then to reincaranate in another body and this time live and die peacefully. To "redress" the historical reversal, in that there were 18 million Jews before the war and now there are only 13 million and the population levels have never recovered from the massive amputation of the body of the nation. But all of this is thinking in abstract concepts - every life is a mracle and a universe - and the numbers game restores nothing. Even if there were 18 million identifying and creatively Jewish Jews alive today, that does not ease the suffering of those torn apart by the Shoah.

The good of the planet ( and who knows what the fuck is good for the planet, its all made up and based on unverifiable assumptions) is not to have another child. As it is the earth groans under the weight of 6 billion voracious consumers who over harvest and over exploit heedlessly and unconsciously. Every child born is the potential death of thousands of domesticated animals and thousands of non domesticated animals whose habitats are devastated by human settlement. There are more than enough parentless children on the planet - let us assume responsibility for them, rather than seeking only to perpetuate our "selves" in the narrowest understanding of that term - us as bodies and particular and particularistic stories and narratives...

So I choose not to have another child...instead someone else's child will become mine, when I nurture them in ways their biological parents could not or would not. I will be part of that village it takes to raise a child.
Posted by Mano at 5:14 PM No comments:

"Everyone's got to serve someone"

Mano
a "hogeh deyot" - Hebrew for someone who thinks a lot about things that are not directly related to the daily round. I worships two G?ds, that are probably one and the same - creativity and balance. Sat. Chit. Ananda. Gila Rina Ditza ve Chedva. Adoshem Hu Elokim. Veshal-om shanti shanti.